Anyone who has ever made a serious effort at Scripture study will identify with what Origen is talking about in this quote. He captures so well that blessed frustration of feeling drawn closer to God, only to have that feeling evaporate. Origen sometimes gets a bad rap — and he deserves most of it; for instance, he was a leader in giving teachers in the Church permission to run amok with allegory, thus sidetracking people for centuries after him. (He seems to have had trouble distinguishing just how literally to interpret Scripture; he was reported to have deliberately castrated himself based on Matthew 19:12.) But he doesn’t always deserve to be looked down or excluded, and this quote shows why. When Origen sets aside the silliness of over-allegorizing and simply ponders the text, he can actually have something worthwhile to say. This quote is probably the best thing he ever wrote that I’ve read. It comes from his sermons on the Song of Songs. The Bridegroom, of course, is Christ. I think that God allows us to grope around and search for Him, and perhaps be allowed to feel that we’ve found Him, if only for a little while, so we won’t give up searching on the one hand, and so that we won’t become complacent or contemptuous on the other. Enjoy the quote, and let us know in the comments if you’ve had similar experiences.

Then she looks for the Bridegroom, who, as soon as she has glimpsed him, departs. And he does this often throughout the poem, something that only someone who has experienced it can understand. Often, God is my witness, I have felt the Bridegroom come to me, and stay with me quite long; but when suddenly he withdrew, I could not find what I sought. Then again I desire his coming and sometimes he returns; and as soon as he appears and I hold him in my hands, again he slips away. 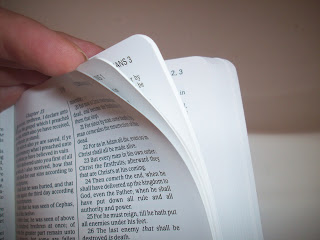